The 8th round of the Rockstar Energy Motocross Nationals was in Moncton, New Brunswick at River Glade MX Park. So far in this series, the weather has been almost perfect and this past weekend was nothing less with clear skies and hot temperatures.

The sixth anchor is the church. The church is not a place or a particular group of people. It is the family of God or the “house of God.”  It becomes the hope of the world when it is rightly centered on Jesus and makes its mission to point people to Him. It is like a beacon, or buoy, that are often used to mark an anchor for a sailor. When the church points people to itself, or its leadership instead of Jesus, it becomes destructive.

The church is the hope of the world. It is an anchor we can rely on because in the bible, Jesus says “on this rock I will build my church, and the gates of Hades will not overcome it.”

In other words, the church will never be destroyed. It will stand through the ages. And it has. Therefore, it qualifies as an anchor that will not break or give in no matter the pressure that bears upon it.

I know this is surprising to most of you. In fact, it is surprising to me as well. The church is far from perfect! Many churches and denominations have fallen away and many people who have placed their hope in the church, have been crushed in the process. How can we place our hope in such an imperfect anchor?

If you don’t know the purpose of something you will abuse it. The Pharisees and Sadducees were using God and the Bible to control, manipulate, and abuse people. In the name of God they would build up themselves, their wealth and their power. They taught people to serve them. They would control people by making them feel guilty and ashamed and unworthy. They fed off of the people’s  fear and feelings of God’s rejection. All for the purpose of making themselves look good and to keep the people dependent upon them.

Jesus taught differently. He taught His followers to lead by being servants of all. He taught His followers freedom from guilt and sin. He taught and modelled acceptance and love before requiring change. He preached Good News not religion. In fact, the only people Jesus preached harshly to, were the religious. He despised people using God’s name to manipulate people. It made His loving Father look bad.

The church becomes the hope of the world when its central purpose is to point people to Jesus. It becomes a destructive religion when it points people towards a man or uses their sin to manipulate them. Jesus never promised a perfect church. But He did promise the church would stand if it stood upon the Gospel (the Good News) of His death and resurrection and would leave all of the other religious mumbo jumbo behind.

The church will never be perfect. But it is God’s house. It is where He dwells. It is the place where God wants you to find your strength and hope.

Michael Thacker was prepared to speak but due to a very severe tooth infection he was unable to speak. I filled in for him and shared about the importance of reading and learning from God’s word.

Shawn had a good start first moto, riding in 3rd. He made the pass for 2nd early and was on the back wheel of the leader for the rest of the moto, but was unable to make the pass because he ran out of tear-offs. In the second moto, his bike started bogging right after the start… He did a lap and pulled into the mechanics area, after making a few quick random checks he re-entered the race and the bike ran fine for the remainder of the moto, putting in a great comeback ride to 8th … for 5th overall. 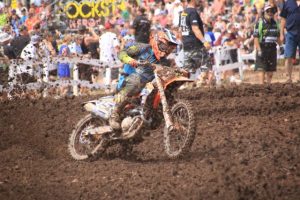 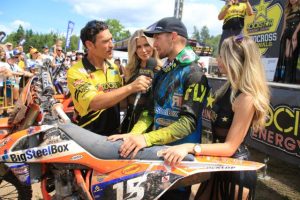 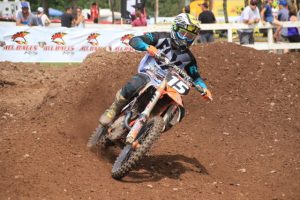 Cade put in another two solid motos with two top 5 starts. In the first moto he ran the pace of the leaders but was passed by another rider finishing 6th. In the second moto, he was 4th on the first lap, but slid out in a corner and had to wait a bit to reenter the track safely. He raced is way up to 8th place. 6-8 moto finishes for 7th overall. 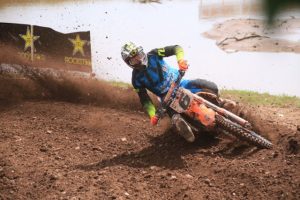 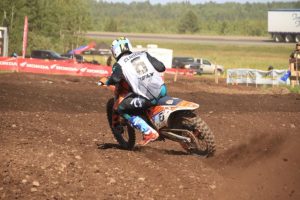 Eric returned to racing after a week off from his groin injury. In the first moto he finished 19th.  On the 2nd lap of his second moto, a rock came flying at him and hit him in the head right above his goggles… Eric pulled into the mechanics area to asses the damage, having a severe cut to his eyebrow, he was unable to finish the race. He later went to the hospital for stitches. 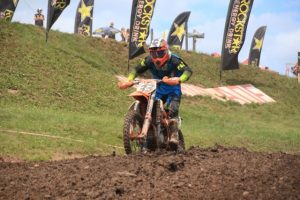 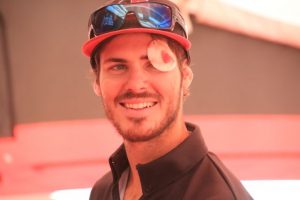 Because of the severity of Michael’s unfortunate tooth infection, he made the decision not to race. 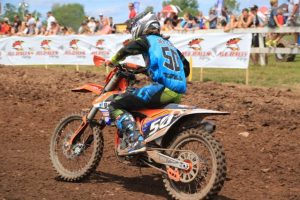 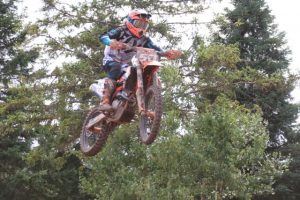 Our ministry, and race team would not be possible without the tremendous generosity, and support of our growing sponsors. Our primary goal is to share Christ’s love on, and off the track, and to provide a compassionate ear, and heart for those who are lost and hurting. The truth of Jesus never fails to provide hope during despairing times. Thanks again to all those people who provide their time, money, and prayers as we travel across this beautiful country- Canada that we call home. Have a great week!