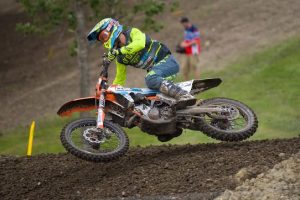 Round 4 of the Jetwerx Canadian National Motocross Series brought the ClubMX Redemption racing team to the beautiful Canadian prairies. McNabb Valley MX track, newly added to the circuit, displayed some really well-groomed black dirt, which was just perfectly grippy and rutty during race day. Joey Crown, once again, climbed on the podium, while teammate Josh Osby had a mechanical issue during the first moto but redeemed himself with a great holeshot in the second race.
After the meeting, I shared a devotion about the choice King Josiah made that changed the course of his heritage by choosing to follow after God and not in the ways of his father and previous wicked kings. 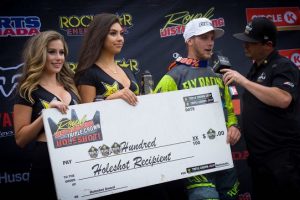 Josh Osby saw his practice get cut short when a
mechanical problem occurred. The whole team
worked hard with the support of the KTM factory
team to get Josh’s bike going in time for Moto 1.
Unfortunately, after being rushed to the line, Josh
barely made a lap and had to pull in to the
mechanic area. Osby redeemed himself in the 2nd
moto by pulling a great holeshot, followed closely
by his teammate. After a few mistakes in the first
laps, Josh sat just inside the top 5, crossing the
finish line in 5th for 16th overall. Josh is now 4th
in the 250 championship standing. 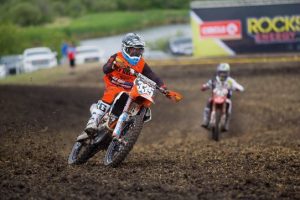 Joey Crown‘s first moto of the day was filled with
ups and downs. After being out front and leading
for the first few laps, Crown went down and started
losing positions. Joey had to settle with a 5th place
finish, which left him hungry for more in the next
race. With another great start in the second moto,
Joey fought hard to stay in the top 3 until the
checkered flag. His consistency gave him one
more overall podium and some valuable
championship points. Joey is now sitting in 3rd in
the 250 championship, only a couple points behind
2nd and 1st place.
450 rider, #39 Eric Jeffery, took a round off, but will be back for some of the Eastern rounds. The team will now be taking a well-deserved break and come back on the Canadian East coast on July 7th
.
250 Championship Standing
1. Shawn Maffenbeier – 206 points
2. Jess Pettis – 201 points
3. Joey Crown – 186 points
4. Josh Osby – 171 points
5. Marco Cannella – 169 poin 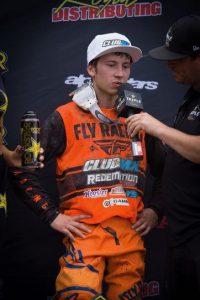