Results from Prince George round 3

The third round of the Triple Crown series was in Prince George B.C. The rain fell all night and into morning qualifying races, making for a wet track. We had wet and muddy conditions all day but being that it is a sandy track, it turned out to be good racing as the day went on! 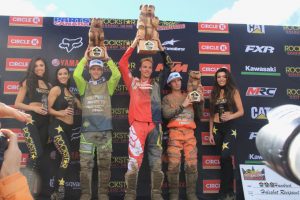 After riders meeting, I shared a devotion about King Solomon being given the gift of wisdom which in turn, gave him wealth and fame… leading to his destruction. Attached is a voice recording from my cell phone while I shared the devotion.

In the first moto, Josh got off to decent start in 4th place where he stayed for the rest of the moto until the last lap. One of the riders in front of him had a bike malfunction which allowed Josh to move into 3rd place. In the second moto, Josh had an 8th place start and quickly made his way into 3rd place by lap 5, where he remained until the checkered flag. His 3-3 finishes gave him 2nd overall. Josh is 2nd in points, only 1 point behind the leader. 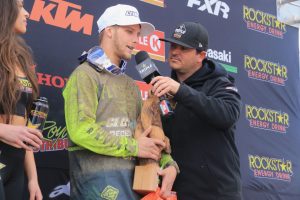 Joey got the holeshot in the first moto and had a bit of a lead on 2ndplace until around the half way point where he tightened up and made two mistakes falling back to 3rd. Joey finished 2nd in that moto due to a rider’s bike malfunction that was ahead of him. During the second moto, Joey ran in 5th place for pretty much the entire race. His 2-5 moto finishes gave him 3rd overall. Joey is 4th in points, 11 points behind the leader. 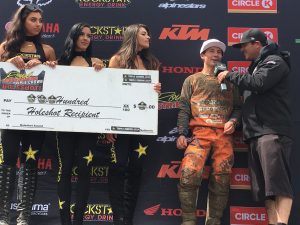 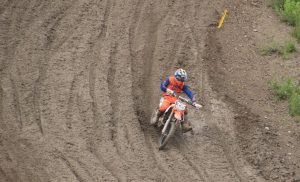 Eric had a great start first moto up in 4th place until 4 corners later when a large rock hit his goggles breaking his roll-off system. Eric came in for a goggle change and worked his way from 36th up to 17th place finish. In the second moto he made his way from a 24th place start up to 15th. His 17-15 moto finish gave him 15th overall. Eric is 14th in points. 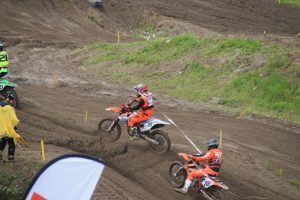 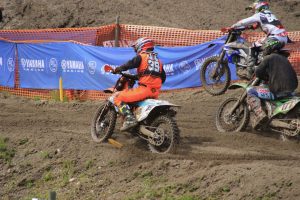 It was a great weekend for the team with both our MX2 riders on the podium! Next weekend we are racing round 4 in Minnidosa, Manitoba. Thank you for all of your prayers and support!