Results from Sand Del Le round 5 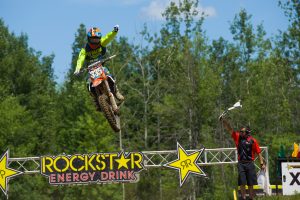 The ClubMX Redemption racing team was back to racing in Canada this past weekend, riding a sandy track for the first time of the season. It had been a while since the series made a stop in Sand Del Lee and both Joey Crown and Josh Osby had never rode the famous Ontario track in the past. It was under an intense sun that Crown got his first moto win of the season, Osby got a top 5 overall and Eric Jeffery made a comeback to the 450 class. The team also received the great support of Manalco Contracting for the weekend and their representatives were treated to a VIP experience. After the rider’s meeting, I shared a devotion about our awareness. That the things we are aware of can dictate the path we end up going down in our life.

Joey Crown got his best performance of the season this past weekend in Sand Del Lee. He showed great speed early in qualifying and got 4th gate pick for the 1st moto. When the 1st gate dropped, Joey didn’t wait around and grabbed the lead on the second lap. He was able to put his sand skills to use and kept the lead all the way until the checkered flag, taking the win. Crown got another great start in the 2nd moto, placing him in the top 3. Joey quickly worked his way to 2nd place, but unfortunately after a couple mistakes, found himself in 4th, fighting his way to a podium position. Crown crossed the finish line in 4th giving him a great 2nd place overall on the day. 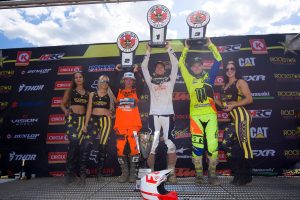 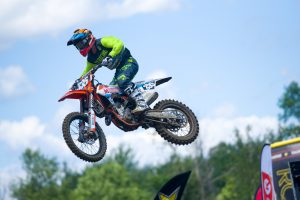 Josh Osby didn’t get the weekend he was looking for but still fought hard until the last lap. Josh didn’t get the best jump off the gate in the first moto and had to do a little bit of extra work to reach the top 5. Osby made some key passes, but also lost some positions to finally get to the checkered flag in 6th place. After a top 5 start in the 2nd moto, Josh kept it really consistent and rode 5th from lap 1 until the end. Osby’s 6-5 results gave him a 4th place overall for the first eastern round. 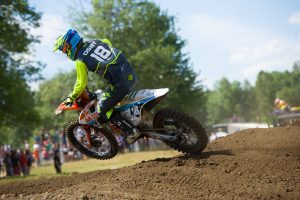 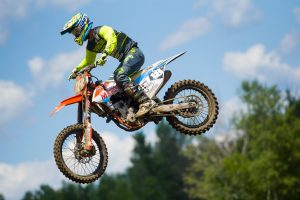 Eric Jeffery made a return to the race track after missing the 4th round of the MX Tour series in Minnedosa, MB. He was looking forward to racing closer to home and had good expectations for Sand Del Lee. The first moto didn’t go as planned for Eric who got a mid-pack start had a rear brake malfunction on the first lap. He would finish the moto in 23rd place. Ready to redeem himself, the 450 rider got a better start to the second moto and fought his way just outside the top 10, in 11th place. Unfortunately, Jeffery collided with another rider and lost a few positions while getting back on his bike. He crossed the finish line in 17th for 19th overall. 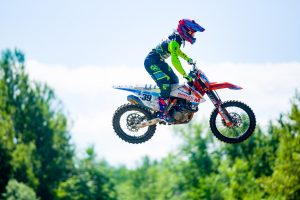